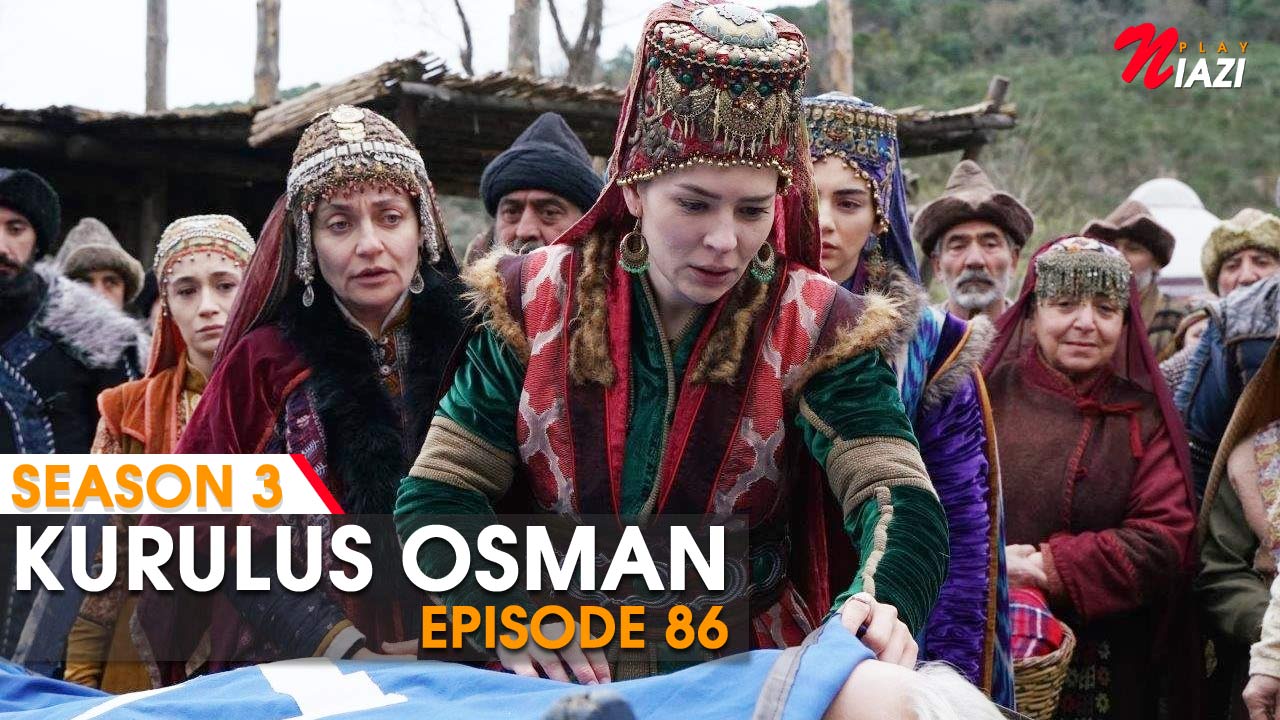 In the Trailer of Kurulus Osman Episode 86 in Urdu Subtitles, we see that dogs can never hurt a wolf. The brave always remain steadfast even after enduring thousands of difficulties. And the cowardly hypocrites get nothing but disgrace and humiliation. Wazir Alam Shah finally got what he deserved. Seeing Sultan Masood, the minister thought that maybe osman Bay would not kill him anymore. But osman was unaware that if the tyrant minister was not eliminated now, he would create great difficulties in the future with his conspiracies. Therefore, osman Bay killed Wazir Alam Shah in one fell swoop in front of Sultan Masood.

Osman Bay’s biggest enemy and the negative character of the series left the series forever. Osman Bay said that difficulties do not leave him behind. One ordeal ends and another great ordeal surrounds them. Osman Bay had just got rid of the tyrant minister. And osman is very close to bringing Geyhatu to an end. And now a new tragedy befell osman Bay in the form of Barkin Bay. Fans were shocked to see the horror and terror of Barkin Bay. Barkin Bay brutally killed Omar Bay. And her fianc with Barkin Bay is no less than a snake in a sleeve. How the Selvi hatun who has been burnt t o ashes in the fire of jealousy by the Malhan hatun has become ashes. And the Selvi hatun wants to harm the Malhan hatun in every way.

Seljan hatun whose character is very intelligent. Selcan hatun has asked Aygul hatun to keep an eye on Selvi. Selvi hatun who is the cousin daughter of Malhan hatun but does not want to see Malhan happy. Next, Barkin Bay and Gangur Bay also want to establish their own separate states. He refuses to accept coins from Gangor Bay because they do not want to work for anyone. Barkin Bay is a snake that bites its own. Ivaz Bayjan has been mentioned repeatedly in the previous episode. Selvi is the daughter of Ivaz Bay, and Ivaz Bay is the brother of Omar Bay. Barkin Bay belonged to another tribe, but he showed loyalty to Ivaz Bay and Omar Bay, so they got engaged to Barkin.

Barkin wants to create terror among the people with his power and his fear. Because traitors are a threat to the state. And the life of a traitor is also very short, so the fate of Barkin Bay is also clear. When the tribesmen came with the body of Barkan Bay, Omar Bay, osman Bay was already focused on Wazir Alam Shah and Geyhatu. Therefore, osman Bay did not go into the details of Omar Bay’s killers. Otherwise, Barkin Bay would have had to face osman Bay’s questions. Nikola who reappeared with osman Bay and Koss. But Nikola is also a cunning devil, so Kosis and osman will never make the mistake of blindly trusting Nikola. viewers In today’s important video we will share with you the full details of the upcoming episode of Kurulus osman. At the same time, we will look at the historical significance of the newcomers.

Will talk about whether osman Bay will kill Geyhatu? What will harm Barkan Bay, osman Bay in the future? Can Kosis and Nikola reunite and will Kosis deceive osman Bay? What is the main reason for the entry in the series Barkin Bay and Selvi hatun? How will things get better between osman Bay and Sultan Masood? There are many more important things you will find in this video. You must watch the video till the end to know the details of all these. In the last scene of the previous episode, osman Bay severed the neck of the tyrant minister in front of Sultan Masood. At the same time, osman Bay’s sword was on Geyhatu’s neck. osman Bay has told Sultan Masood that Geyhatu is my prisoner. It is my wish to kill him or leave him alive.

The Sultan who knows that if Geyhatu dies, the Seljuk Empire will fall apart. Therefore, Sultan Masood will try to persuade osman Bay not to kill Geyhatu in any way. With the exception of Geyhatu and Wazir Alam Shah, Barkin Bay has been the center of attention in the last episode. It is impossible to know who is with whom and who is the enemy of whom. At the same time, it will convey all the important information of the tribe to Barkin Bay. Barkin Bay’s goal is to eliminate all those who are supporting osman Bay. Omar Bay who was speaking in favor of osman Bay’s state. So Barkin Bay martyred Omar Bay while oppressing him. osman Bayou is trying to unite all the Turkish tribes for the establishment of the state. And many tribes have promised unity with osman Bay. But there were some tribes in history who strongly opposed osman Bay.

Kurulus Osman New episode 86 will release on 17th March 2022. You can watch here on this website on the mentioned date. In the episode 86 Barkin will also attack the tribes supporting osman Bay. Barkan will make those who support osman Bay miserable. But the protection of the tribes that will support osman Bay is the responsibility of osman Bay. Therefore, even for Barkin Bay, osman will soon tighten the noose. The departure of the old characters from the series and the entry of new characters makes the series interesting.

Barbarossa Episode 23 in Urdu & English Subtitles What will happen in the new Episode 23 of Barbaroslar Sword of...